A Force for Good

Hello there!
Let’s get down to it, shall we?
My name is Richard Darling, and I am a Star Wars fanboy.

Imagine being a kid when Star Wars came out in the cinema. It probably influenced everything from the games you played outside to the stories you wrote in your literacy class jotters.
The Vader Project was a collaborative exhibit at the first convention I attended. A hundred 1:1 scale Darth Vader helmets were given out to artists all over the globe, who were instructed to go crazy. The result? An astonishing array of different ideas from a hundred different talents.

So what about that photo of the two gents? The fellow on the left is one Steve Sansweet, author of over sixteen books, Star Wars fan extraordinaire, and overall lovely guy. He managed to turn his love of all things Star Wars into a second career, running Rancho Obi Wan, Inc. – a charity that uses the largest private collection of Star Wars memorabilia in the world to educate and inspire.

What better way to bring individuals together than through both creativity and something so widely-loved? This was the thought that drove me, in the autumn of 2013, to approach two talented friends with a proposition of my own: take two Clone Trooper helmets, and go crazy. 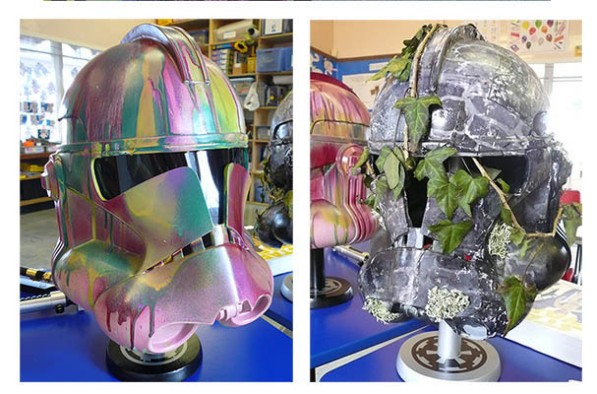 A word on the two virtuosos – my oldest schoolfriends; Daisy-Kay Moore is an award-winning artist based in Glasgow who specializes glasswork, while Duncan Tattersall studied men’s fashion at Central Saint Martins Art College, and has exhibited throughout the country. Neither of them could be aware that the other was involved (purely for pleasant-surprise factor. I do that a lot.)

But also, a lack of competition or even influence meant the two would, in theory, turn out completely different to one another.

Daisy took inspiration from the graffiti and murals around the city, specifically the texture created by spray paint. Duncan, true to his self-confessed obsession with ruins and architecture, set about recreating the appearance of an artifact left for decades in post-apocalyptic overgrown ruin.

Remembering the age I was when I became immersed in science fiction and fantasy, I had an idea that I wanted to bring it back to the place in which I’d grown up with it: my primary school. I pitched the following idea to the teachers (some of whom were also my own, believe it or not): with the help of the two helmets, props, reading material AND the chance to design their own Clone Trooper helmet, I would conduct what would hopefully be the show-and-tell of their year. And just to add immersive value, I’d deliver the whole thing dressed up as Obi Wan Kenobi.
Naturally.

The morning of the symposium was a nerve-wracking one.
Luckily, the success of the two helmet designs seemed to set the tone for the main event – and it went better than I could’ve imagined.

The children – as you should always hope – had bags of enthusiasm and a disarming level of insight. My initial worry was that they’d just wonder what the heck they should be so interested in; this was dispelled in minutes, as they asked any questions without hesitation. Better still, the two helmets received the ‘oohs’ and ‘ahhs’ I’d prayed for!

After immersing themselves in the books, toys and lightsabers, it was their turn to get creative. I’d made a template for them to design their own helmet, and they more than rose to the task. I saw helmets with gold mesh visors, feathered headdresses, even horns… It made me wonder, how many other worlds and stories had influenced their creations? And they even came up with rival teams, each with their own distinct emblem and colour. Kids know their stuff, and don’t doubt it.

At the end of the day (after leaving them with their own full size class helmet), each of the kids received their own empire emblem badge.
I was both touched and humbled by the reactions to the whole event, and those feelings were carried through to the following week, when I saw the display they’d put together for the parents’ evenings.

This project was worth every spent resource, and sleepless night. My foremost hope was that I’d allow these kids a Star Wars Day worthy of the name – and going by the response, I need very little further convincing that I may just have succeeded.

May the 4th be with you,